My son is fascinated with everything outdoors. He loves being outside; if there was a refrigerator with food outside, I don’t think he would come inside at all. Twigs, rocks, dirt clumps, puddles, leaves, flowers, rocks, did I mention rocks? He is already a pro collector. I thought that a nature basket would be a good first matching activity for him.

I started by collecting four nature objects from our yard. We don’t have a pine tree, but luckily a neighbor does and the pine cones were laying in the street. While I may have been able to find a more durable leaf elsewhere, I wanted one that I had access to so I could replace it when he rips it up (I was right- day one with basket- ripped up leaf).

To make the cards, I took pictures on a white background hoping that it would blend in when I printed them out (not exactly but doable).

I then pasted these onto a word document, writing the name on top in English and on bottom in French. I really loved Three Minute Montessori’s post on the importance of choosing the right font. Since I was feeling a little lazy last night, I decided that font wasn’t too important since my son would probably destroy the cards before the writing meant much to him, and went with the print Comic Sans.

Here is the file I printed out to create the cards:

After printing, I used glossy laminate sheets that I had left over from my teaching days to laminate the cards. It is not a great laminate, definitely won’t last more than a month is my guess, but I already had them and don’t plan on buying a laminator… yet (they really aren’t that expensive these days).

First morning lesson went much better than I expected! He sat and watched as I brought each individual item out and matched it to the item. I made the first introduction short and then had him put the basket away on his shelf. We had a second lesson in the afternoon and he did well with handing me the object from the basket when I took out a specific card. The cards did get a lot of wear on them already so the next time around I will have to work at making the laminate stick better. I think I need to use two sheets of laminate stuck together instead of one sheet of laminate stuck to a piece of overlapping paper.

Side note: I forgot how spiky pine cones are and was worried that he would hurt himself, but he is very careful in holding it and seems to know not to squeeze.

Advanced Learning: Three-Part Cards (one additional card with the label detached), Four-Part Cards (adding a definition), rotating and adding more objects to the basket, have the child make their own cards 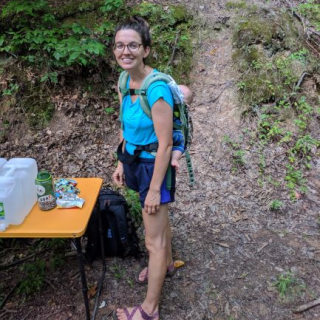